skip to main | skip to sidebar

Lapsing into a Sugar Coma

I got a phone call on Wednesday from the university I applied to inviting me to an interview for next week. So totally stoked, I have booked myself in for major beauty work so as not to scare away the possibility of place on the course. I am being quite vague at the mo about the course because I don't want to jinx anything, but if I promise to reveal next Friday.

This week James asked if I could make Custard Creams and I was more than happy to oblige. I used to make these when I worked at a local coffee shop, but they were double the size I made this week. I think these look far cuter in mini form instead of the Godzilla ones we sold at the shop.

Cooking Instructions:
Preheat oven to 180C/350F. Cream butter and sugar together in a small bowl until light and fluffy. Sift flour and custard powder into butter mixture and mix well to form a soft dough. Roll dough into small balls and place on a greased cookie sheet. Press balls lightly with a fork (just enough to make an impression) and bake for 10 to 12 minutes or until set (don't brown them at all). Cool for 10 minutes on cookie sheet, and place on rack to cool completely.

To make icing, cream butter. Mix together vanilla and cream in a small bowl. Add to butter, then sift in icing sugar and beat with a mixer until smooth and soft.

Form cookie sandwiches with a layer of icing in the middle; let set for two hours. 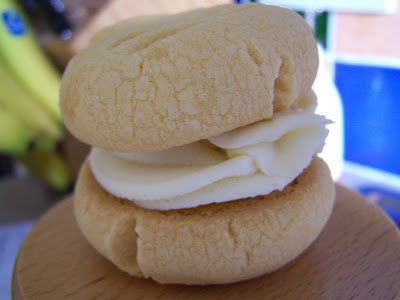 These guys are really good, but are totally fab the next day. My only warning is that the icing is super sweet so be prepared! 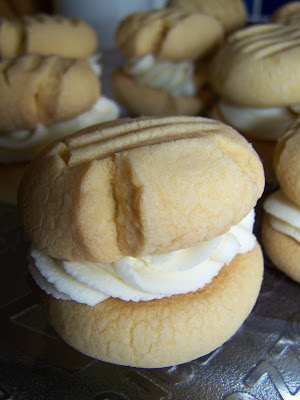 Unfortunately, this post is a fly by as the past 24 hours has been totally mental here. I am trying to apply to for a course at university through it's clearing process (clearing is when certain courses still have seats available). The particular course I'm applying for starts on the 1st of September and so I am manically trying to get everything together and get it back to them asap. Because of this, I'm just doing a picture post for this week, but promise to offer more next Friday! 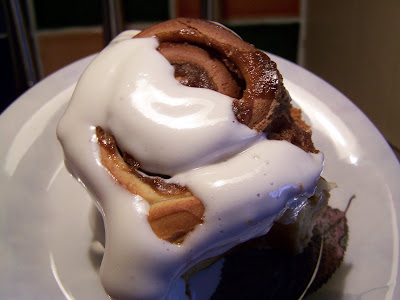 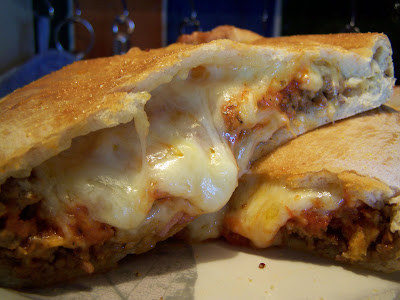 Lately, I have been sooo fighting the urge to bake all the time. Now you might be saying to yourself, "How is this a bad thing?!". Well, let me tell you it is right now. Not only are James and I trying our hardest to lose some weight, but also we are feeling the pinch with the cashola these days. So I have been baking to take the edge off, but trying to only use stuff I already have in the house.
Here we go..... 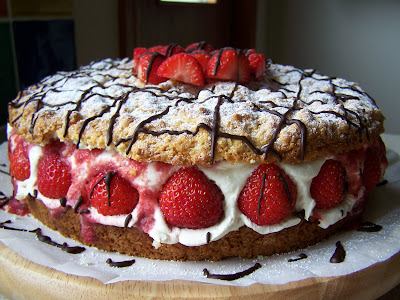 Directions:
Preheat the oven to 180/400. Lightly grease a 9 inch round cake tin. Shift together the flour, 1/2 cup of the sugar, baking powder, bicarb soda and salt in a large bowl.
In a separate bowl, beat the buttermilk, oil and egg. Combine together the buttermilk and flour mixture, and stir with a fork just until combined. (Don't over-work the batter or your cake will turn out dense.) Empty the batter into the pan and spread evenly with the back of a spoon. (This can be quite tricky as the batter is very sticky. You are trying to make sure the batter is spread out to all sides, not perfect on top. ) Bake until the top is golden brown and a toothpick inserted in the centre comes out clean, about 18 to 20 minutes. Cool in the tin on a wire rack about 5 minutes. Remove the cake from the tin and let cool completely on the rack.
Using a serrated knife, cut the cake in half horizontally. Place the bottom layer on a serving plate and spread evenly with the whipped double cream. Next pour the strawberry compote into the centre of the whipped cream and spread outwards evenly. Cover with the top shortcake layer.
Cut several of the strawberries in half and push them into the whipped cream around the sides of the cake. (Make sure they are snugly set into the cream or they will fall out.) Dust the top of the cake with icing sugar and place a few sliced strawberries in the centre. Drizzle with cake with the melted chocolate.

Strawberry Compote
Ingredients:
200g strawberries, chopped
1 large orange, zest and juice
2 tsp caster sugar
100ml champagne (cava)
Directions:
In a large frying pan, heat the strawberries with the orange zest and juice and the sugar.
Add the champagne and cook down until the liquid volume is reduced by half. (I found this to be about a half an hour.)
Tah Dah! 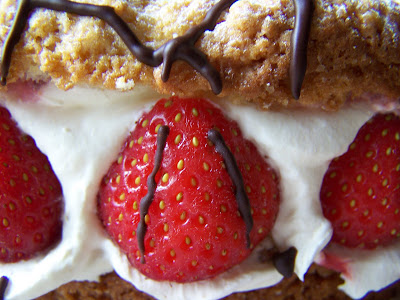 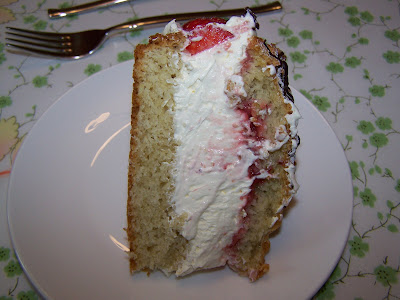 PS - Juno was good, but I wouldn't say it was Oscar worthy. Sorry...

While I'm writing this post I am watching 'Juno'. I haven't seen it yet but I've been listening to the soundtrack for ages. My sister got me and James into Kimya Dawson who does quite a few of the tracks on the soundtrack. The film is good so far but I'm only like 10 minutes into it.

Oh for my American friends who read this blog, I must apologise for not putting in my American equivalent in when I give recipes or yammer on about stuff in British. There are 14 pounds in a stone and a digestive is the British graham cracker...kinda. I promise I will try to put in both American and British terms from now on. :)
So on to the eatin'....

Yummy Turkey Chili (Serves 4)
500 grams Turkey mince (ground turkey)
1 large onion, chopped
2 garlic cloves, minced
1 tablespoon chili powder
1 1/2 teaspoons brown sugar
1/2 teaspoon salt
1/2 teaspoon ground cumin
1/4 teaspoon allspice
1/4 teaspoon black pepper
14 ounces beef broth
10 ounces chopped tomatoes
1 tablespoon cider vinegar
8 spring onions (scallions), chopped
In a large saucepan, mix in the turkey, onion and garlic, stirring constantly, until the turkey is browned and the onion is soft.
Add the chili powder, brown sugar, salt, cumin, allspice and pepper to the turkey mixture. Stir everything together to completely coat the turkey and the onions with the spices.
Stir in the broth, tomatoes and vinegar and bring to a boil. Reduce the heat to medium and partially cover and simmer until the broth is thickened, about 30 to 40 minutes.
Serve the chili topped with the spring onions. 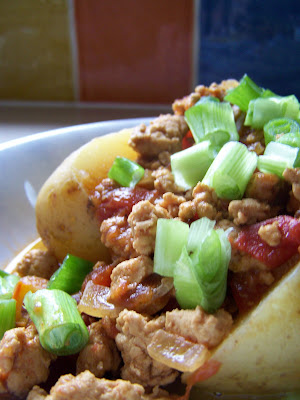 Verdict: I am totally converted to turkey in my chili now and will never go back to beef mince (ground beef)! This chili is very filling and tastes great.

Spray a 7 inch square cake tin with cooking spray.
In a large saucepan combine the sugar, evaporated milk and butter and heat on high. Bring the mixture up to the boil and stir constantly. Reduce the heat to medium and boil gently for 4 minutes, stirring all the time.
Add the chocolate and marshmallows to the saucepan. Remove from the heat and stir until smooth.
Pour the fudge mixture into the prepared tin and leave until cool. Then place the cooled fudge in fridge until firm, about 2 hours. After firm, cut fudge into 36 pieces. 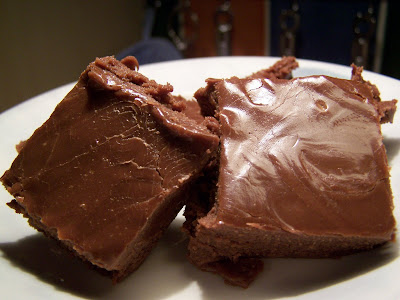 Verdict: It has been a major hit! People who have tried it say it's light and creamy and not dense like most fudge. It has been placed in my recipe box to join my other dessert winners.
Posted by Tropicalia at 00:01 1 comment: 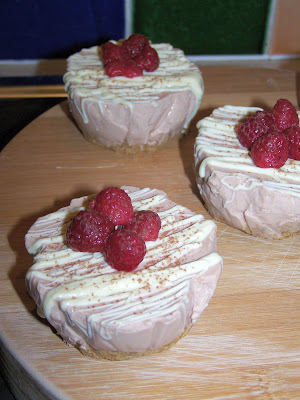 For this week's recipe I chose Double Chocolate Cheesecake from one of my Weight Watchers books. I made a few tweaks which I have put in along with the original recipe.

I decided that instead of making one cheesecake, I would make 6 little cheesecakes. I tend to always make little cakes instead of 1 large one. I don't know why, but I think maybe it's just that I think they look cuter. Plus I don't feel as bad about eating a little cake on my own rather than a large one!

Double Chocolate Cheesecake
(Serves 8 and is 5 points a serving)

6 portions low-fat digestive(s), crushed (I found this to be about 10 biscuits)

4 tablespoon artificial sweetener, powdered (As Splenda is my enemy, I used regular sugar)

Melt the butter over a low heat and stir in the biscuit crumbs. Tip them into the cake tin, pressing them evenly over the base. Chill for about 20 minutes.

Meanwhile, sprinkle the gelatine into a small jug containing the just-boiled water, stirring well. Allow to dissolve for 4-5 minutes to give a clear liquid.

In a large bowl, beat the cheese to soften it, then mix in the yogurt, vanilla and chocolate extracts and sweetener. Dissolve the cocoa powder in 2-3 tbsp hot water, stirring until smooth. Add to the cheese mixture. Taste the mixture, adding more powdered sweetener if needed.

Stir the cooled gelatine liquid into the cheese mixture, making sure that it is thoroughly incorporated. Tip the mixture over the biscuit base and leave to set for about 2 hours.

When ready to serve, carefully remove the cheesecake from the tin and peel away the lining paper. To decorate, melt the white chocolate in a heatproof bowl, positioned over a pan of simmering water. Fill a spoon with the melted chocolate and drizzle it over the surface of the set cheesecake. Cut into slices, then serve, sprinkled with cocoa powder. As I made the little cakes, I topped them with some raspberries I had lying around to give them some colour.

If you can get hold of Chocolate Extract, you can add 2 tsp as well as the vanilla essence. 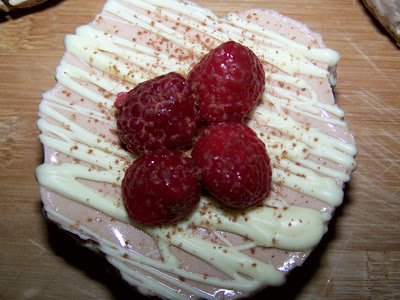 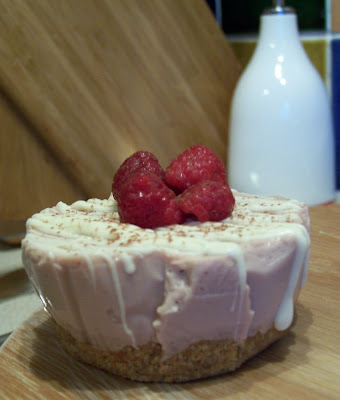 I love baked cheesecake and normally when I make cheesecake I bake it. This was the first time that I had made cheesecake with gelatine. It has not converted me, but it was really nice.

I would make this again but change the recipe slightly by adding more philly, less yoghurt and trying raspberry essence along with the vanilla essence.

Candy For the Eyes

Tropicalia
Fife, United Kingdom
I am 29 years old and reside in Scotland with my husband, James and our fat cat, Angel. I am a huge lover of food and a very keen baker. I am a Graphic Designer and am always dabbling in the arts. I have recently started been designing and promoting my husband's new book, 'Silly Beggar: The World's Stupidest Begging Letters'. 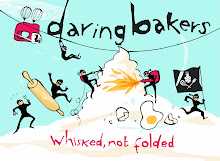